Hawke's Bay lowlands and hill country is a highly modified environment - meaning generations have made changes to the land use, cleared bush, drained wetlands, realigned streams (even rivers!).  New species have been introduced - everything from sheep, cows and horses to pests like possums, rats, rabbits and hedgehogs.  New plants were introduced but many have become invasive weeds.

These changes have had an impact on the native birds, lizards, insects, fish, trees and plants in Aotearoa - New Zealand.   But how much of an impact? What is threatened here? What could we lose if we don't do something now?

The Hawke's Bay Biodiversity Inventory was begun in 2013 led by Hawke's Bay Regional Council scientist. People and conservation groups came together to discuss and assess what is known about biodiversity in Hawke's Bay.  They helped to identify areas of concern and where biodiversity gains could be made.

The inventory has improved our knowledge, and we continue to add to it as we fill in our knowledge gaps about native habitats and species. The main gaps are in our understanding of marine biodiversity, private land biodiversity and many of the smaller organisms like invertebrates, lichens and bryophytes (liverwort and moss plant family).

What is an ecosystem and why protect them?

Small fragments of threatened forest types are left, but are fragmented and vulnerable to ongoing threats from pest animals and weed.   Bush reserves, the Mainland Island of Boundary Stream, and QEII covenanted bush on farms are some of the protected areas.

Wetlands is a term for land areas that are saturated with water, either permanently or seasonally, such as bogs, fens, marshes, estuaries, swamps, ponds, lakes.  These are biodiversity hotspots for plants, birds and fish, many of which are endangered.  We have only 2% of our original wetlands left, so the focus is now on protecting and restoring existing wetlands, and even creating new ones. This does not have to mean a loss of productive land, as often grazing is a useful management tool for keeping weeds down, which in turn helps wading birds.   Wetlands also have important roles in the environment - purifying water, flood control, carbon sink and stabilising shorelines.

Freshwater habitats in Hawke's Bay includes rivers and streams, wetlands, lakes and lagoons.  Historically rare ecosystems associated with freshwater environments are braided riverbeds, lake margins, cushion bogs, and ephemeral wetlands (ie, wet only at certain times).  People can enjoy recreation when there is healthy freshwater.  However challenges to freshwater ecosystems are algae such as phormidium and didymo, aquatic weeds like hydrilla, sediment and pollution, and low summer flows.

One of the best ways we assess the health of a river is to look at macroinvertebrate community composition.  We can check the number and nature of the tiny insect species in the water. 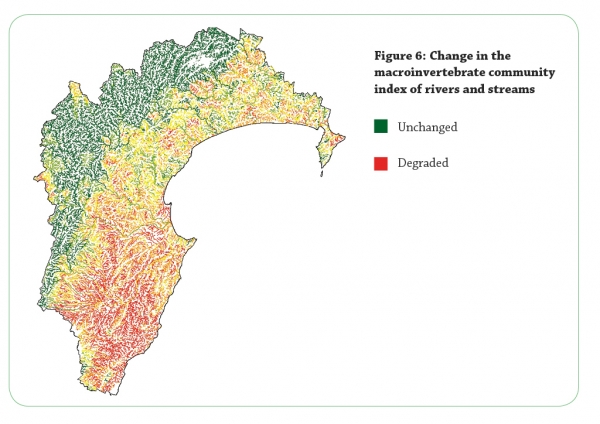 These form the boundary between land and sea. As such these are distinctive, dynamic environments that provide important feeding and breeding habitats for migrating birds, wading and sea birds and for ocean-going fish. Different types of estuaries in  Hawke's Bay are tidal lagoons (eg, Porangahau and Ahuriri Estuaries, Maungawhio Lagoon),river dominated lagoons (Tukituki, Clive-Ngaruroro, Wairoa) plus many stream estuaries and lagoons (Waipatiki).

A lot of effort has gone into improving estuary habitats.  In Ahuriri Estuary weirs have been installed to create more habitat for the rare bittern; whitebait spawning sites have been fenced, and scrape-lake wetlands have been established (at the Westshore Wildlife Reserve).  Similar scrapes and ponds in the Waitangi Regional Park have also been created. There are tighter controls around discharges into land and water around these areas (such as from highway development), but our estuaries remain under enormous pressure from development.

Dunes and the Coastal Fringe

The Hawke's Bay coastline is our playground, but often unnoticed are the creatures that make their home there. Hawke's Bay has two main habitat types - the sand and gravel beaches of the Bay itself, and the extensive rock and boulder reefs around Mahia Peninsula and south of Cape Kidnappers.  The highest diversity of species in the inter-tidal zone is found in the reefs - algae, invertebrates - and these are important feeding grounds for wading birds.  The reefs are under pressure from soil run off, vehicles, seafood harvesting, invasive species and reduced water quality.   Hawke's Bay's sandy beaches are likely to be important breeding areas for shellfish.

Dunes used to provide habitat for birds, insects and reptiles but are now significantly altered and damaged by human activity and predators.  An exception is the dunes at Ocean Beach where restoration work has provided nesting boxes so that penguins have returned, and planted native plant species to stabilise the dunes and provide habitats for lizards and katipo.  At Rangaiika Beach (north of Ocean Beach, Hawke's Bay) a similar restoration plan is underway.

The seafloor of Hawke's Bay's near-shore marine environment has high biodiversity (starfish and crustaceans) and has unique invertebrate communities. Areas of cobble and pebble reef (like the Wairoa Hard in the north of the Bay) are important nursery areas for many fish, in particular snapper. Sub-tidal rock reefs support diverse algae, invertebrate and fish communities at Pania Reef, Mahia Peninsula and south of Cape Kidnappers. The deeper Lachlan Ridge south of Mahia supports a wide range of fish targeted by commercial and recreational fish.

There are few official records of changes in the marine habitat of Hawke's Bay although it is likely that habitats have been heavily influenced by sedimentation from rivers and fishing activities.  The Hawke's Bay Marine and Coastal Group has developed a research roadmap to improve knowledge of the marine area.   Research into the Wairoa Hard took place late April 2018.

Emmanuel Macron, President of France to US Congress April 2018

Health to the ocean means health for us.

The preservation of biodiversity is not just a job for governments. International and non-governmental organisations, the private sector and each and every individual have a role to play in changing entrenched outlooks and ending destructive patterns of behaviour.

Cherish the natural world because you are part of it and you depend on it.