What is the Hawke's Bay Biodiversity Strategy?

The Hawke's Bay Biodiversity Strategy 2015-2050 was published in November 2015.  It was developed collaboratively by a large number of independent people, businesses, agencies and councils.  It is their considered and necessary response to declining biodiversity in the region.

The Strategy sets a goal of having important biodiversity habitats and populations of native species enhanced, healthy and functioning by 2050.  It has taken more than 200 years to create the biodiversity problems we face today ... so it's going to take a while to make progress towards fixing them.

The Strategy is one part of the blueprint to achieve this goal.  It is not a regulatory, 'rule based' document but a guide to inform the whole community in their biodiversity efforts.

How was the Strategy developed?

In 2013 an assessment was begun of what was known about biodiversity in Hawke's Bay. This resulted in the Biodiversity Inventory which summarises what we have got and where it is, and helped to identify areas of concern plus areas where biodiversity gains could be made.  It's a living document, and an ongoing process.

Working together Hawke's Bay's biodiversity is enhanced, healthy and functioning. 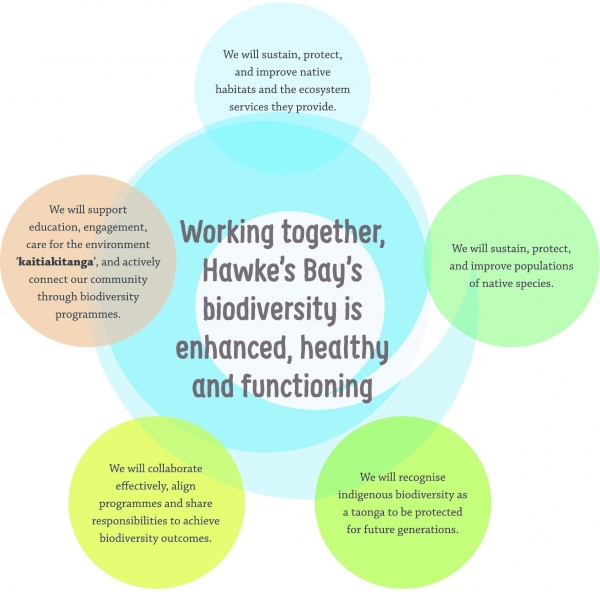 “It’s time to say: enough. Enough of brutalizing biodiversity. Enough of killing ourselves with carbon. Enough of treating nature like a toilet. Enough of burning and drilling and mining our way deeper. We are digging our own graves.”

António Guterres, the secretary general of the United Nations

The diversity of life forms, so numerous we have yet to identify most of them, is the greatest wonder of this planet.

It is that range of biodiversity that we must care for - the whole thing - rather than just one or two stars.