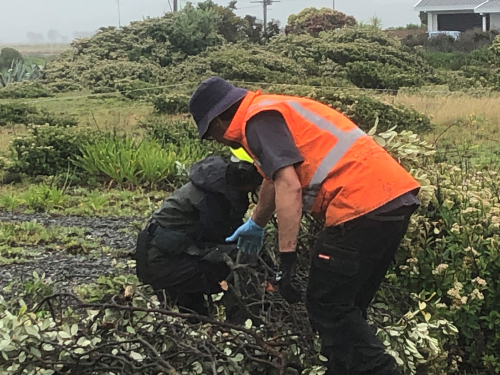 Following on from a successful community event at Westshore in November which saw over two hundred indigenous plants identified and marked at the area colloquially known as The Gap, stage two weed control work has now started.

Kay Griffiths, an ecologist from The Conversation Company, planned and lead the day’s events.

"It is so awesome for the on-the-ground control to begin, and really nice to be sharing some best practice techniques for control of these nasty invasive plants with rangatahi and others from the Jobs for Nature programme run through Te Taiwhenua o Te Whanganui ā Orotu,” said Ms Griffiths.

“We made great progress with the invasive weed control work on day one and it is also super exciting to know we are protecting and enhancing the population of a plant that is considered endangered on a national scale," says Ms Griffiths.

Four native species were identified during the earlier identification and marking session, including Pimelea xenica, which is nationally threatened.

“We appreciate the support of all our partners in this project” said Debbie Monahan, general manager at Biodiversity Hawke’s Bay.

“At this stage in the project, I’d particularly like to acknowledge the assistance of the Napier City Council team who collaborated with Kay Griffiths and the Te Taiwhenua team to mulch the weeds they had removed” said a pleased Ms Monahan, about the first day clearing the noxious plants.

Ms Monahan said it has been great that people have reached out to support the project and she looks forward to engaging them further as the project proceeds. “This is a fantastic opportunity for local groups and businesses to get involved in enhancing and restoring their precious local biodiversity.”

The site has been divided into six sections, for different groups to work on. The local Westshore Residents and Development Association and Te Taiwhenua o Te Whanganui ā Orotu have put their hands up, but there is still the opportunity to be part of this exciting project.

If you are a local group, school or business and you are interested in being part of this local project, then email Debbie Monahan, general manager, Biodiversity Hawke’s Bay on gm@biodiversityhb.nz