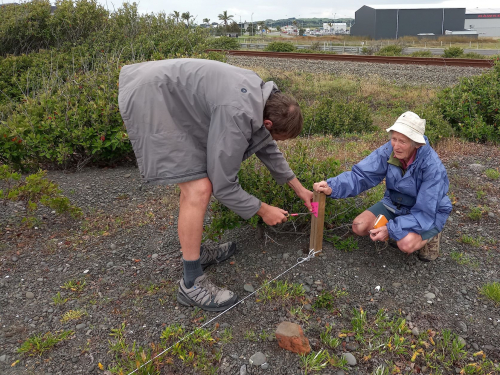 Westshore locals and enthusiasts from as far away as Wairoa, joined ecologists Kay Griffiths and Marie Taylor on Saturday to mark, map and count the precious native plants remaining in a Westshore area colloquially known as The Gap.

The aim is to protect and enhance this important ecosystem, encouraging our local biodiversity to thrive.

“The first step has been to find out how many of these precious plants are here and we have been surprised to mark and count over two hundred” says Debbie Monahan of Biodiversity Hawke’s Bay.

“We found heaps! In fact, we nearly ran out of markers” said Ms Griffiths from The Conservation Company. “This is an awesome start to this important restoration project, and it was great to see so many people keen to help out and learn more” she said.

“With the first stage of the project complete, we can start the second stage of enhancing the indigenous biodiversity of The Gap by removing inappropriate exotics and weeds.” says Ms Monahan.

Ms Monahan says this is a fantastic opportunity for local groups and businesses to get involved in enhancing and restoring their precious local biodiversity. So often significant sites like these are more inland, off the beaten track and harder to get to.

The site has been divided into six sections, for different groups to work on. The local Westshore Residents and Development Association and Te Taiwhenua o Te Whanganui ā Orotu have put their hands up, but there is still the opportunity to be part of this exciting project.

If you are a local group, school or business and you are interested in being part of this local project, then email Debbie Monahan, general manager, Biodiversity Hawke’s Bay on gm@biodiversityhb.nz