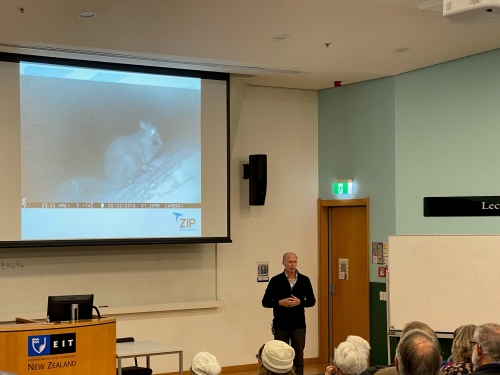 Speaking at a Biodiversity Hawke’s Bay hosted event at EIT earlier in the week, Mr Bramley shared ZIP’s high-tech approach to mainland predator elimination and explained why elimination rather than suppression is essential for success.

“We want to ensure permanent freedom from predators so our vulnerable and threatened native biodiversity can recover and be re-introduced’ says Mr Bramley.

Mr Bramley, who has a background in engineering and conservation, says “We are excited to play our part in Predator Free South Westland” project, which was launched in March this year with the ambitious goal of eliminating possums, rats, and stoats from 100,000 hectares of South Westland.

“Eliminating predators will remove the risk of TB for farmers and increase birdlife in one of the country’s most stunning landscapes.”

ZIP is responsible for the day-to-day operational delivery of the project and will be using the ‘Remove and Protect’ model they’ve developed. “This approach enables us to carry out predator control in rugged mainland landscapes where it’s pretty much impossible to construct predator proof fencing.”

The team at ZIP use an established network of lures, traps, and cameras, all connected by radio and satellite to rangers' phones and laptops, to detect predators, says Mr Bramley.

“We use syringes to squirt out an egg-based mayonnaise which seems to appeal to all predators. The great thing about using mayonnaise is that you can secure it to an automatic lure dispenser, which means the ranger doesn’t need to be constantly refreshing the lures.”

While ZIP uses aerial toxins such as 1080 to nip the problem in the bud, camera-based detection networks are the key to ZIP’s approach to predator elimination. “By using our remove and protect approach, once free of predators, there will be no need for large-scale repeated use of aerial toxins in the project area” says Mr Bramley.

ZIP will be building on their success working in the Perth River Valley in South Westland (a ‘smaller’ area of 10,000 hectares) for three years now, and just 18 months after stoats were successfully eliminated, native birds have begun to recover in the valley.

“Before the predator removal operation, no kākā were detected on camera in the Perth River valley” says Mr Bramley.

“Kākā were first encountered by our field rangers in the field site in August 2019, after the completion of the operation. Adults and juveniles have since been detected and the ZIP team report increased sightings of many native birds, including kea, yellow-crowned kākāriki, kererū, whio, tomtit and the South Island robin” says Mr Bramley.

ZIP is helping to pave the way to a predator free New Zealand and often share their research and development successes on their website www.zip.org.nz