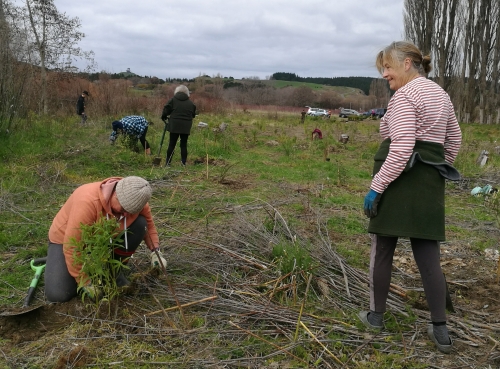 Biodiversity Hawke’s Bay launched the contestable fund for the first time earlier this year, offering between $1,000 and $5,000 to applications with high biodiversity value, and those that engage or educate communities in biodiversity restoration.

Biodiversity Hawke’s Bay general manager Debbie Monahan says there was strong interest in the fund, with some inspiring applications received from throughout the Hawke’s Bay region.

“We have been encouraged by the great mahi being done by many groups to protect and enhance biodiversity in Hawke’s Bay.”

The Maraetotara Tree Trust will receive $5,000 for a Maraetotara River Restoration project that involves planting natives to improve water quality and to provide a corridor for birds.

The ECO Management Group Ltd from Hastings has been awarded $3,000 for its Urban Green project, which will see brochure made to promote planting of indigenous native plants to act against biodiversity loss and to fight against global warming in urban areas.

The Te Wai Mauri Trust will use its grant of $5,000 for riparian and wetland planting in the Waitangi stream eastwards to the Waitangi Regional Park and Atea a Rangi.

The Forest Lifeforce Restoration Trust has a project called Maungataniwha Native Forest Possum Control. The Trust will use its $2,500 grant for possum control in the area in the Wairoa District.

Another initiative in the Wairoa region is the Waiparere Farm Pest Control project, which receives $2,500 in pest control and trapping to ensure ongoing growth of Waiparere’s rich biodiversity.

The Haumoana Ecology Group has been awarded $2,000 for signage to educate the public on the local birdlife and wetlands at Haumoana.

Ms Monahan congratulated the successful applicants and wished them well with their projects.