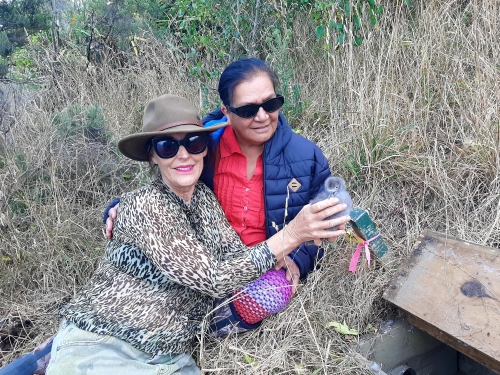 Cape Sanctuary has marked another biodiversity milestone in its successful seabird programme with the hatching of two Sooty Sheerwater Petrel chicks.

Nesting boxes and a sound system with petrel calls successfully attracted two breeding pairs to the sanctuary’s seabird enclave on the cliffs of Cape Kidnappers.

Since 2008, the sanctuary has translocated three different species of Petrel: Cook’s Petrel, Grey-Faced Petrel, and the Common Diving Petrel from offshore islands to the mainland.

However, the two chicks, both born this year, were as a direct result of breeding pairs flying over the sanctuary being attracted to the site and breeding there.

“Cape Sanctuary is doing some amazing work and it is wonderful to see biodiversity flourishing. It is a good example of the difference a predator-free environment makes to biodiversity.”

Liz Lowe, one of the founders of Cape Sanctuary, said the two chicks were an exciting addition to the sanctuary and showed that if the right habitat was in place, breeding pairs would come.

A sound system which plays eight different types of petrel calls each night is located directly underneath the bird’s flight path and draws them down to the nesting boxes which have been created to encourage them to breed.

The first to do so were the Fluttering shearwater, who in 2017 started prospecting, but to date have not hatched a chick. About seven Sooty began prospecting last year, two of which were successful.

“We monitor our burrows all year and I noticed these Sooty were prospecting in the same burrows as our grey-faced petrel chicks,” Liz said.

“They’re a totally different bird and I knew it wasn’t a grey-faced, so I started keeping an eye on what was going on and noticed that when the grey-faced left they went in and used the same burrows and laid an egg.”

Although the gender of the two chicks is unknown, it is hoped they will return in seven-years, each with a breeding partner.

Over the next two months, the chicks will continue to be fed by their parents, before the process of fledging begins, whereby they stop being fed, lose weight, gain adult feathers and ready themselves to launch.

The seabirds are in a “maximum-security wing” located at the top of the 2500-hectare sanctuary. Native vegetation has replaced the farmland and there is a designated runway for the chicks to spread their wings before fledging.

Liz says it shows what can happen when you have all your vermin under control, and a team of volunteers – “everything flourishes”.

The sanctuary, which stretches from Ocean Beach to Clifton, was founded by Liz and husband Andy Lowe, with Julian Robertson, to protect and enhance New Zealand’s threatened species.

Vital to its survival is a 10.6km predator-proof fence that was built in 2006. A number of endangered endemic species have been reintroduced, with many thriving and numbers increasing.

“It’s actually been a lovely partnership but really when you look at it, for Māori it’s basically bringing back our taonga that a lot of Hapū and different Iwi can’t afford to do.”

She began supporting the conservation efforts in 2009, after her late cousin Paratene Te Huia, who had been involved since 2004, passed away. Through her whakapapa, she has played a significant role in translocating species.

The species, which have been translocated from Kapiti Island Ngati Raukawa, Whakarongotai, Te Atiawa, Te Arawa and Ngāi Tahu, are handed over to Cape Sanctuary under the guardianship of Bennet’s mother, Hariata Te Ruru Akonga Mohi Baker, who is the oldest surviving of Ngāti Mihiroa.