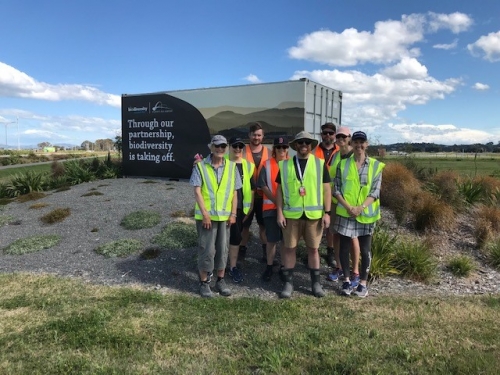 The wind settled long enough for many of the senior leadership team from the airport and Biodiversity Hawke’s Bay representatives to plant the 900 or so plants that had been eco-sourced and supplied by Marie Taylor and her team at Plant Hawke’s Bay. Like most things, the important stage is the preparation, which was undertaken by South Pacific Landscapes in the weeks leading up to the day. Solid preparation and a Planting 101 tutorial from the South Pacific team mean the plants will have a much higher chance of survival in their first year and beyond.

This is the second year of a five-year partnership between Biodiversity Hawke’s Bay and the airport, and a great opportunity for the teams to work together. Stuart Ainslie, Hawke’s Bay Airport chief executive officer was all hands-on deck alongside his senior leadership team and says “Hawke’s Bay Airport prides itself on being a committed steward of the environment and the community in which we operate. We see our ongoing partnership with Biodiversity Hawke’s Bay as a tangible way of reinforcing this commitment.”

Debbie Monahan, Biodiversity Hawke’s Bay general manager, is delighted to see the relationship with the airport really taking off. “Many great individuals, groups and businesses are doing great things to protect, grow and enhance biodiversity in Hawke’s Bay, and we are keen to support and share these success stories” says Debbie.

For more information on what you can do to grow and enhance the biodiversity around where you live, visit www.biodiversityhb.org