Students Step Up with Biodiversity Speeches 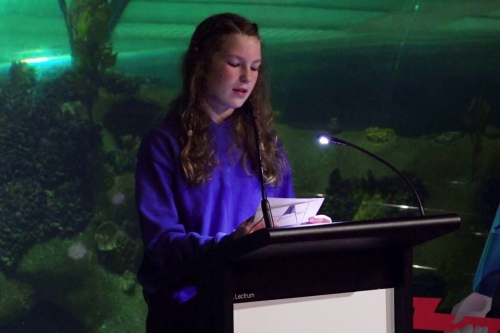 A positive speech about farm biodiversity came from the young winner of the 2018 Hillmac Electrical Intermediate School Speech Contest - Tildy Ormond, from Sherenden and Districts School on the Taihape Rd.

“Farm biodiversity is important to me.  I want people to know that lots of farmers are doing really good things on farms to benefit our environment,” she said in her speech explaining what’s being done on her family’s farm to make a difference.

The second of the annual Hillmac Electric Speech contests was held last night (Thursday 6 September) and the finalists were ten intermediate school students. This event followed last week’s event for primary school speech makers.  The theme for both contests this year was “Biodiversity in your backyard”.

Chief sponsor CEO Mike Hill, from Hillmac Electrical, reinforced the need for communication skills in the work place.  “We place real importance in communication with our staff and are thrilled to be sponsoring this contest as our way of helping to grow confident kids in the Bay.”

Wairoa students shone in their first year in the competition. Abby Morunga, year seven at Wairoa College came second with ‘Climate Change.’  She talked passionately and persuasively about the negatives of climate change such as wild fires, and mentioned her grandfather who is currently fighting fires in California.

Third place was Camden Champion, a year eight student at Nuhaka School with his speech “The Impacts Humans have on Biodiversity.” Camden talked about his experience of water testing with Enviroschools Northern Facilitator Jenni Scouthern-King.

Biodiversity Hawke’s Bay Project Manager, Genevieve Bennett says, “It is really encouraging to see such knowledge and enthusiasm from our young people. The region’s biodiversity strategy looks ahead to 2050, when they will be managing our land, water, bush and birds, so it’s great to see them already stepping up to be future leaders in the environmental space.”

All of the Bay’s six intermediates and Hastings Christian School were involved in the contest, with the finalists from each school being heard last night.

2.     Cindy Wang, Hastings Intermediate  -The Impact of Phytoplankton on our Backyard

3.     Camden Champion, Nuhaka School -The Impacts Humans have on Biodiversity.

8.     Tempera Reihana, Napier Intermediate - The Effects of our Environmental Actions

The judges were Kerry Howley, Toastmasters Area Director, and Marc Van Irsel, president of Pania Toastmasters. They spoke of the passion and powerful messages of the ten contestants.  Ms Howley praised the students for their confidence, passion and courage: “This is the perfect vehicle to communicate the importance of biodiversity and the need to act now”.

Organiser Anna Coleman, owner of the Confidence Company, spoke of her vision of creating confident kids, one speech at a time. She is passionate about building awareness of oral language, where students tell their stories, without having it all scripted.

“The aim is to grow the Hillmac Electrical Intermediate School Speech Contest so it’s in our DNA, in the schools’ calendars as that’s what we do around here in term three,” she says.  “A great thanks to the organisations who support this event and see the potential for children speaking.”