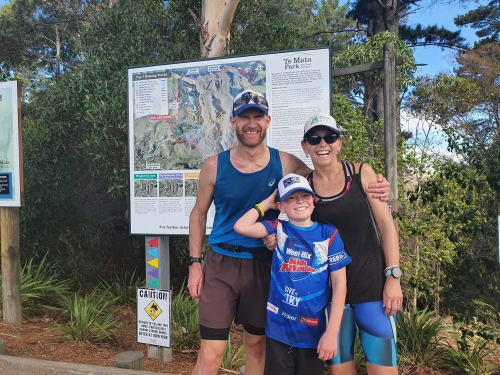 Sheer determination, and a passion for biodiversity has seen an eight-year-old tackle the tough terrain of Te Mata Park and raise more than a thousand dollars for native trees in the process.

While the 22km was a little more than George Fisher had bargained for, he traversed all seven trails in just under four hours, with his parents, Mark Fisher and Nicole Sattler, by his side the entire time.

His efforts have seen him raise more than $1200 – enough to donate at least 120 plants to the Te Mata Park Trust.

George says he is happy that he has been able to raise “so much” money for the Trust and particularly enjoyed seeing the native trees during his run.

“It was a really really long way, but I had a lot of fun,” George says. “My favourite part was the first trail (light green) which was downhill for the first kilometre.” He also liked “scrambling” up the rocks on the blue trail.

“We encourage people of all ages to find ways of raising money for the patch of biodiversity that is important to them.”

Nicole Sattler said George talked the whole way and blew them away with his focus and determination.

“The thing that made me so proud, was not that he did it and it was really hard, but that his attitude throughout the whole run was just so positive, and he didn't let himself get daunted by the task,” Nicole said.

George says he never once thought about giving up. “I concentrated on the trail I was on, and we took a photo at the end of each trail.”

Although, by the end, George admits he was very tired, but the double scoop of ice cream was a welcome treat. “I got cookies and cream and hokey pokey.”

Members of the Napier Harrier Club, which they are a part of, also joined, including a 70-year-old who ran the whole way with them.

They wanted to thank everyone who has supported George and donated. “We've had donations from people we don't know, which is really amazing, and it shows people are willing to support a good cause,” Nicole said.

While George doesn’t know what his next step will be, he hopes to be able to help plant native trees in Te Mata Park, some of which he would have helped fundraise for.