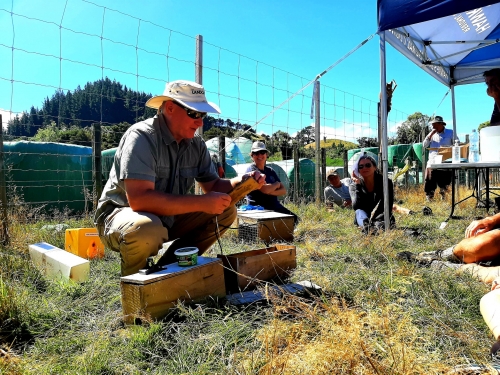 When all methods of introduced-predator control are used together, New Zealand’s taonga are given a chance to not only survive but thrive.

Little Bush Reserve is a prime example of this and was the centre of a Biodiversity Hawke’s Bay led event held on Sunday, where local experts shared their knowledge.

More than 60 people gathered at the 12-hectare remnant of montane podocarp hardwood forest, located 55 kilometres west of Napier, where they were taken on a guided bushwalk of the area and learnt how to use many of the different traps and other tools used to control introduced predators.

The event was supported by The Conservation Company, NZ Landcare Trust, the Hawke’s Bay Regional Council and the Forest & Bird Napier Branch.

The native forest is owned by the New Zealand Royal Forest & Bird Protection Society who have been taking care of the area with restoration planting, weed control and predator management for many years.

Addressing the crowd, Biodiversity Guardians of Hawke's Bay management committee chair Kay Griffiths, said that with the aim of Predator Free 2050, there was a lot of research being put into the predator control space, and New Zealand is leading the world in predator control techniques.

Together with NZ Landcare Trust’s Nathan Burkepile, and Hawke’s Bay Regional Council (HBRC) Biosecurity Biodiversity Advisor Beau Fahnle, they went through a number of traps that are available from DOC 200 box traps to an automatic resetting NZ AutoTrap.

Mr Fahnle said that as part of a whole ecosystem approach, the HBRC has used a relatively new Ecosystem Prioritisation programme which is undertaken using Zonation, a software that prioritises ecosystem or habitat sites based on their representation, connectivity, and conditions.

“Hawke’s Bay has over 50 different ecosystem types making it one of the most diverse regions in New Zealand, and some of those are really underrepresented with only little fragments left.”

“Little Bush is one of those fragments, as there is very little of this type of forest left.  A real feature is the number of rimu and some huge pokaka,” he said.

While stock have been excluded for many years, feral deer have had a destructive impact on the bush. Deer tend to eat those plants that taste the best and create a “desert” underneath the mature trees by removing the understory that is “so important” for insect life, regeneration of the canopy and an essential part of the whole system.

The deer fence, attached to the existing stock fence has worked wonders, with all but one deer out of the reserve.

Ms Griffiths says it is about educating people as the damage these animals do is “not well understood”.

“Stock fences have been the traditional method, but as feral deer have increased phenomenally in the landscape in Hawke’s Bay in the last 10 years, they are now presenting a problem in nearly every bush that’s not deer fenced.”

Mr Fahnle says it is about working with landowners to ensure native habitats and species are protected, and there are funding provisions to assist with this.

PHOTO: Nathan Burkepile, of the NZ Landcare Trust, demonstrated how to use different traps for pest control. PHOTO/BIODIVERSITY HAWKE'S BAY