In defence of Dotterels 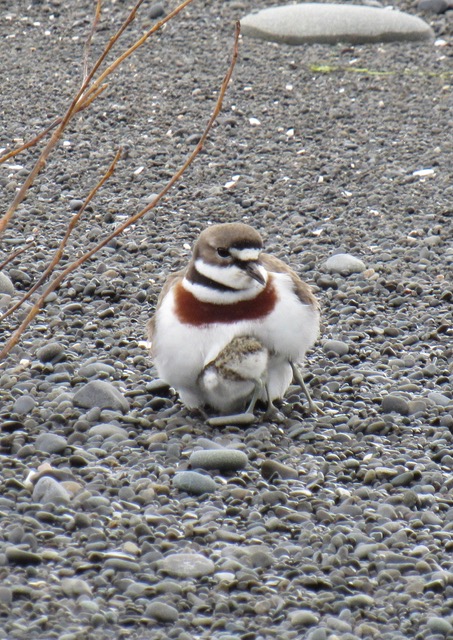 On Hawke’s Bay’s rocky foreshores Dotterels are busy building nests, incubating eggs and bringing up their chicks. But these rare native birds are facing increasing threats from their chosen places of habitation: wandering pet dogs, off-road vehicles and beachcombers walking amongst the driftwood. A group of concerned local people is changing that for the better.

Save The Dotterels is a group of eight core members plus many more volunteers who are working in multiple ways to protect Dotterel populations on the coasts near Napier and Waipūreku Clive. The group has its beginnings in the social media posts of Paddy Cooper, a Bay View resident who had witnessed nest and chick disruption and destruction over many years. His posts to the Napier News group on Facebook highlighting his efforts to protect these birds struck a chord with others who were concerned and taking action in other areas along the coast.

Two principal species of Dotterel live in Hawke’s Bay – these are the Banded Dotterel (Pohowera) and New Zealand Dotterel (Tūturiwhatu). Both are ground-nesters, laying their eggs in pebble-lined hollows where they are well camouflaged by their spotted, mottled colouring. Unfortunately, this camouflage makes the eggs and flightless young particularly susceptible to human activity, as it is very difficult to see them before it’s too late. Crushed eggs, and chicks separated from their parents are key causes of early mortality.

Since forming as an organised group, the highly motivated Save the Dotterels members have identified key activities and developed relationships to progress their aims to protect Dotterel populations and educate beachgoers. These include:

The Spring 2022 nesting season has been a valuable learning experience for the group. Since formalising a volunteer monitoring programme, many more nests have been discovered and their fates eagerly awaited. Unfortunately, the news is not positive: the number of chicks that survive to fledge is very low and most of the Pohowera pairs (who incidentally mate for life) nest 2 or 3 times in a season to try to ensure the survival of at least one chick to fledging stage.

Keeping vehicles off beaches and dogs on a short lead would go a long way to ensuring the greater survival of these endangered species. Such measures are increasingly being adopted around New Zealand (see this article), and Napier City Council recently adopted a dog control bylaw that establishes a seasonal ban on off-lead exercise along Westshore Beach during the Dotterel nesting season.

Marilyn Scott, who facilitates the group of volunteers at the Waipūreku Clive site, is up-beat about the attempts to educate the public, saying “We have been heartened by the positive response of so many of the public who we have kept abreast of our mahi via Facebook groups and other publicity”.

The next priority action for Save the Dotterels is to better understand the outcomes of both young and adult Dotterels. Currently, at the Waipūreku Clive site, nesting outcomes are being recorded to a field map app which is part of a national and World-wide data stream. Banding the birds could enable capture of further information about these birds. The group also hopes to source funding for motion-activated cameras that can record data on how nests and chicks are being impacted by predators. Such cameras have been crucial for demonstrating the impact of predation by domestic cats in both Eastbourne and Kaikoura Dotterel populations.

The recent survey of shore bird populations conducted for Hawke’s Bay Regional Council indicates that Banded and New Zealand Dotterel populations are increasing in the region, but remain threatened species and require ongoing conservation efforts, especially with the expected impacts of climate change.  Thus, the work of Save the Dotterels members is valuable in engaging and educating people to live more harmoniously with these small shore birds.

How can you help? As Lynne Anderson, Secretary of Birds NZ and a keen 'Save the Dotterels' member muses, “We need some ‘National Park Beaches’ that deserve the same respect (as National Parks). Take only photos, leave only footprints!”. She recommends the following actions that we all can take: